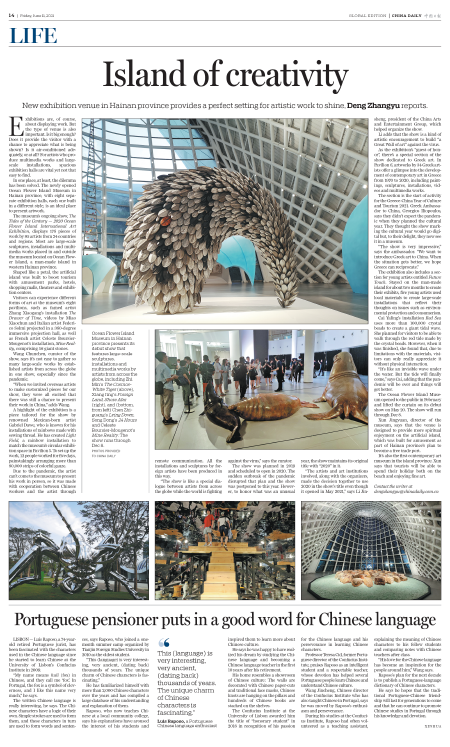 Exhibitions are, of course, about displaying work. But the type of venue is also important. Is it big enough? Does it provide the visitor with a chance to appreciate what is being shown? Is it air-conditioned adequately, or at all? For artists who produce multimedia works and large-scale installations, spacious exhibition halls are vital yet not that easy to find.

In one place, at least, the dilemma has been solved. The newly opened Ocean Flower Island Museum in Hainan province, with eight separate exhibition halls, each one built in a different style, is an ideal place to present artwork.

The museum’s ongoing show, The Tides of the Century－2020 Ocean Flower Island International Art Exhibition, displays 176 pieces of work by 95 artists from 24 countries and regions. Most are large-scale sculptures, installations and multimedia works placed in and outside the museum located on Ocean Flower Island, a man-made island in western Hainan province.

Shaped like a petal, the artificial island was built to boost tourism with amusement parks, hotels, shopping malls, theaters and exhibition centers.

Wang Chunchen, curator of the show, says it’s not easy to gather so many large-scale works by established artists from across the globe in one show, especially since the pandemic.

“When we invited overseas artists to make customized pieces for our show, they were all excited that there was still a chance to present their work in China,” adds Wang.

A highlight of the exhibition is a piece tailored for the show by renowned Mexican-born artist Gabriel Dawe, who is known for his installations of rainbows made with sewing thread. He has created Light Field, a rainbow installation to match the museum’s circular exhibition space in Pavilion 5. To set up the work, 12 people worked for five days, painstakingly arranging more than 80,000 strips of colorful gauze.

Due to the pandemic, the artist can’t come to the museum to present his work in person, so it was made with cooperation between Chinese workers and the artist through remote communication. All the installations and sculptures by foreign artists have been produced in this way.

“The show is like a special dialogue between artists from across the globe while the world is fighting against the virus,” says the curator.

The show was planned in 2019 and scheduled to open in 2020. The sudden outbreak of the pandemic disrupted that plan and the show was postponed to this year. However, to honor what was an unusual year, the show maintains its original title with”2020″ in it.

“The artists and art institutions involved, along with the organizers, made the decision together to use 2020 in the show’s title even though it opened in May 2021,” says Li Jinsheng, president of the China Arts and Entertainment Group, which helped organize the show.

Li adds that the show is a kind of artistic encouragement to build “a Great Wall of art” against the virus.

As the exhibition’s “guest of honor”, there’s a special section of the show dedicated to Greek art. In Pavilion 6, artworks by 34 Greek artists offer a glimpse into the development of contemporary art in Greece from 1970 to 2020, including paintings, sculptures, installations, videos and multimedia works.

The section is the start of activity for the Greece-China Year of Culture and Tourism 2021. Greek Ambassador to China, Georgios Iliopoulos, says they didn’t expect the pandemic when they planned the cultural year. They thought the show marking the cultural year would go digital but, to their delight, they now see it in a museum.

“The show is very impressive,” says the ambassador. “We want to introduce Greek art to China. When the situation gets better, we hope Greece can reciprocate.”

The exhibition also includes a section for young artists entitled Future Touch. Stayed on the man-made island for about two months to create their exhibits, five young artists used local materials to create large-scale installations that reflect their thoughts on issues such as environmental protection and consumerism.

Cai Yaling’s installation Red Sea uses more than 100,000 crystal beads to create a giant tidal wave. She planned for visitors to be able to walk through the red tide made by the crystal beads. However, when it was finished, she found that, due to limitations with the materials, visitors can only really appreciate it without physical interaction.

“It’s like an invisible wave under the water. But the tide will finally come,” says Cai, adding that the pandemic will be over and things will get better.

The Ocean Flower Island Museum opened to the public in February and lifted the curtain on its debut show on May 20. The show will run through Dec 8.

Xun Jingyuan, director of the museum, says that the venue is designed to provide more spiritual enjoyment on the artificial island, which was built for amusement as part of Hainan province’s plan to become a free trade port.

It’s also the first contemporary art museum in the island province. Xun says that tourists will be able to spend their holiday both on the beach and enjoying fine art.