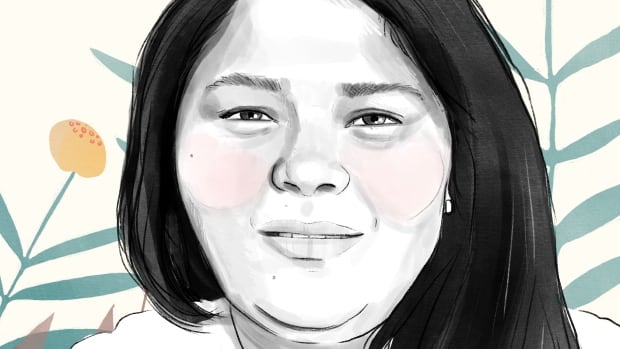 The tranquil streets of Trois-Rivières, Que., turned into a human wave of colourful patterns and intricate artwork on June 2, 2021, as thousands marched to show support for the family of Joyce Echaquan.

The coroner’s inquiry into the death of the 37-year-old Atikamekw woman had wrapped up that day at the courthouse — marking the end of four weeks of intense, emotional testimony.

The resounding message heard during the march, from citizens as well as Indigenous leaders, was that Echaquan’s death had to mean something — and her life also needed to be honoured.

That has also been the sentiment that many Indigenous and non-Indigenous artists across Quebec have used as inspiration since Echaquan’s death at the Joliette hospital on Sept. 28, 2020.

The video she shared shortly before her death, showing a nurse and a patient attendant using racist slurs as Echaquan lay on the floor of a room in the Joliette hospital, shocked Atikamekw visual artist Eruoma Awashish.

“I felt powerless. I needed to do something, to feel better. But I didn’t know what. In the end, I thought ‘I’ll do what I know, I’ll create art.'”

Awashish painted a portrait of Joyce Echaquan — the plain black and white strokes of her face and flowing hair contrasting with a gold and purple circle in the background.

That design is now featured on the cover of a legal document that could be central to the redefinition of Indigenous and human rights within Quebec’s health-care system, Joyce’s Principle.

Awashish, along with her colleague Sarah Cleary from the Innu community of Mashteuiatsh, sold reproductions of the portrait online to raise money to buy art and crafts supplies for Echaquan’s children. The gift was delivered right before Christmas in 2020.

“It was a way to help them express their pain through creativity,” said Awashish. That notion is why Awashish and Cleary hope to hold art workshops for children in Manawan, once COVID-19 restrictions are lifted entirely.

“We both firmly believe in healing through art.”

Awashish’s work did not stop there. The local art museum in Joliette commissioned a mural from her during the fall of 2020, in collaboration with the local Native Friendship Centre.

“I wanted the mural to be visible for everyone outside,” said Jean-François Bélisle, executive director and chief curator, Musée d’art de Joliette.

Awashish started painting a bright yellow background on the entrance wall that offered an “unobstructed view for the public from outside,” said Bélisle, during a time when museums were closed because of the pandemic.

Atikamekw artist Eruoma Awashish’s mural on the wall of the glass entrance of the Musée d’art de Joliette honours the memory of Joyce Echaquan. 4:33

The city was struggling to cope with the tragedy that unfolded within the walls of the hospital, the main health centre that serves the Atikamekw population of Manawan, on the unceded territory of Nitaskinan.

Bélisle said the artwork opened up a much-needed dialogue “where there is no politics or health-care issues involved,” he said. At the core of that dialogue, and at the forefront of the mural, was a family who had lost a mother.

“When you want to get a message across, and it comes through emotion, the message really sinks in and stays with people, much more than by telling them,” said Awashish.

The local Native Friendship Centre in Lanaudière (CAAL) also wanted to address the racism that was exposed in Echaquan’s final video, and how it affected the community of Joliette.

“A lot of people felt rage, sadness and negative feelings. And those feelings were justified,” said Sabrina Paton, the cultural co-ordinator at the CAAL.

Amidst that anger, after brainstorming with a friend, Paton decided to “bring together non-Indigenous and Indigenous people to celebrate beauty and friendship.”

The idea of a music show, celebrating all cultures, quickly rose to the top.

Pioneers like Florent Vollant, Anachnid and Elisapie, who also became the artistic director, signed on to perform for Waskapitan. Emerging artists, including young Atikamekw voices “who are doing extraordinary things” were also invited, said Paton.

Established production companies like Black Widow Productions, which have toured with Bryan Adams and Diana Krall, also agreed to help.

“This was their way of giving back and taking part of something that’s bigger than us,”  said Paton. “So it was really incredible.”

A show that normally would have taken eight months to organize was put together in just over a month.

More than 30,000 people tuned in for the live stream concert on December 3, raising more than $100,000 for Quebec’s Native Friendship Centres to develop anti-racism initiatives for urban Indigenous communities and youth.

The organizers are now planning to make Waskapitan, which means “Let’s get closer” in Atikamekw, an annual event.

By blending Quebec traditional music from the likes of Yves Lambert and Richard Desjardins with Indigenous traditional music, “we wanted to show how complementary those things, those musics could be together and how together it just works,” said Paton.

Breaking those cultural barriers is something that also came instinctively to Marie-Ève Turgeon.

“I was so horrified by the violence and injustice of her story that I felt the need to give her back all the respect and love she should have had the right to,” Turgeon  said.

Her portrait has since been shared thousands of times. Turgeon has spotted it on t-shirts and banners in vigils and marches across Quebec, including during last week’s march in Trois-Rivières.

“I understood very quickly that the portrait carried a cause that was much greater than me, and that it now belonged to Joyce,” said Turgeon.

The portrait was also sewn onto the ribbon skirt Glenda Sandy wore that day. Sandy is an Indigenous nursing consultant for the Ingram school of nursing at McGill University, in Montreal.

She has been working to redevelop the curriculum to include more ethically sound and culturally safe Indigenous health issues.

Sandy said the ribbon skirt has cultural significance for the Plains Cree, as well as several other First Nations. She chose purple, Joyce’s favourite colour, and placed seven ribbons on it for her seven children.

The process was a first for her, and wasn’t simple.

“Every time I got frustrated with myself, I thought of her. And that brought me back to the reason why I was doing this.”

Sandy, who identifies as Naskapi and Cree, initially felt “shame in being associated with the nursing profession as an Indigenous woman.”

That feeling has since been replaced with resolve, “to do what I can for my kids so that they don’t face the things that we faced.”

The day of the march, Sandy and a crowd of more than 2,000 walked alongside Joyce Echaquan’s children. When it was all over, Echaquan’s husband shared a Facebook live, thanking all those who have supported the family at marches, through donations and through art.

“Thank you Joyce, — migwetch — thank you for bringing us together. You were our children’s mother — you are their mother — and you are my entire world.”